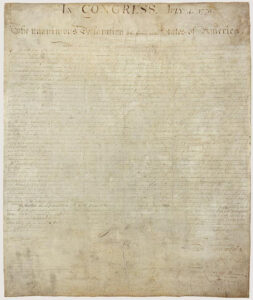 Many Americans have never read their national birth certificate: The Declaration of Independence. This document contains many principles which give us a sense of identity as Americans. Ignoring this document affects both us and our posterity. Our lack of self-identity has resulted in a loss of this unique character that is at the roots of our liberty.

Americans are very fortunate to have a national birth certificate. America is one of the few countries throughout the history of the earth with a birth document. Our national birth date is marked by this document. This is a very significant observation in coming to understand the roots of American identity.

A document which spells out our national birthday underlines the importance of the written rule of law in the hearts of early Americans. The written rule of law was a foundational principle understood and practiced by the colonists. They believed in operating their personal life by using the Bible and operating their governments using written constitutions. They understood that unwritten law is subject to the arbitrary whims of a monarch. For instance, today, in countries like China, laws can radically change overnight when a new leader takes control. Without any warning, people and enterprises suddenly become illegitimate or victims of new crimes.

The same thing happened to the colonists when King George III replaced King George II in 1765. Under the reign of King George II, the colonists were more or less content with English policies and laws. They had been fortunate the former king chose to adopt just policies with the colonists. After 1765, unfettered by any rule of written law, King George III and his ministry began instigating a series of oppressive laws on Americans denying them the basic privileges of English citizenship. Americans felt like they were being enslaved by the King and his ministry. This motivated Thomas Paine to make a clarion call for a written Constitution to be formulated for America. He called it a “national charter”.

“..let a day be solemnly set apart for proclaiming the charter; let it be brought forth placed on the divine law, the word of God; let a crown be placed thereon, by which the world may know, that so far we approve of monarchy, that in America THE LAW IS KING. For as in absolute governments the King is law, so in free countries the law OUGHT to be King..”
Thomas Paine

Before the Constitution could be created there had to be a declaration. Paine continued:

“Nothing can settle our affairs so expeditiously as an open and determined declaration for independence. While we profess ourselves the subjects of Britain, we must, in the eyes of foreign nations, be considered as rebels. A manifesto published and despatched to foreign courts, setting forth the miseries we have endured and declaring that we had been driven to the necessity of breaking off all connection with her, at the same time assuring all such courts of our desire of entering into trade with them, would produce more good effects to this continent than a ship freighted with petitions to Britain.”

“A government of our own is our natural right. Ye that love mankind, stand forth! Every spot of the Old World is overrun with oppression; Freedom hath been hunted round the globe; Europe regards her like a stranger, and England hath given her warning to depart; oh, receive the fugitive, and prepare an asylum for mankind!”

The colonists were not rebelling against society, they were rebelling against a tyrannical king. Since they had no representation in Parliament, they felt subject to only the king even though he had ostracized them for 10 years. They had followed the law spelled out in the English Magna Carta of “petition for redress of grievances.” They submitted several petitions to the King, to Parliament and even to the citizens of Great Britain. The reasons for the revolution, they stated, were specific, not nebulous (vague). The colonists wanted to remain loyal subjects to the king. Driven to desperation, they penned a document to justify the cause of independence to themselves and to the world.

Many of the founders struggled within their souls to bring themselves to rebel against something they had always been taught to respect and honor from childhood. Just like we are taught today to respect our country and flag; the founders were taught to respect and be loyal to the King. They had to make peace with their conscience that independence was the right thing to do even at the risk of their lives, fortunes and sacred honor. Signing the Declaration would make them subject to treason which was one of the most serious and unforgivable crimes of that time. The punishment for treason was death in the cruelest manner, and one’s posterity would be marked for generations.

The signers sacrificed a great deal to bring us a written birth document. What have we personally sacrificed to preserve it? Thomas Paine stated, “That which we obtain cheap, we esteem lightly”. Perhaps by studying the founding documents we can learn to appreciate and preserve the legacy of the signers.